"The trip was splendid.  It was very exciting from day one till the last day..."  Mabutho 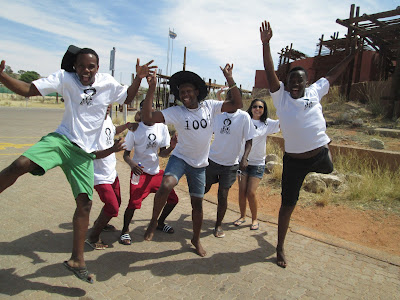 "The experience I had on this trip was one that I will never forget.  It taught me so many things that are essential for my growth as a young woman.  Things such as being independent and someone who is hands on and a good listener." Angela

"The things that I have done, saw, inspired me and helped me grow as a person.  People I have met made me realise that no matter what colour you are it doesn't matter we are all one..." Sanele

"My experience was a very nice experience because I got to see how other people survive in bad situations - like being unable to travel the world because of where you come from and what you have.  This trip taught me to be grateful for what I have and what I have achieved in life." Andile

"It was a phenomenal experience to really see and understand the world for myself, to interact with other people and look at the world from their point of view involving tradition and belief so that I wouldn't just believe the everyday stereotypes." Thabiso

A group of 8 ARROWSA participants went to the Kalahari in October for 8 days. The group included 5 male teenagers and 1 female - all ARROWSA Bechet participants between the ages of 15 and 19 years.  Leading the group were Mr Bhekithemba Dlamini (ARROWSA Bechet co-ordinator) and Ms Mary Lange (ARROWSA Chair). As outside funding was not available each participant and the production held by ARROWSA Bechet for the school and public had raised funds needed for the trip.

The trips to the Kalahari are one of ARROWSA's projects that aim to bring different cultures together in face-to-face meetings that promote knowledge and thereby breakdown negative stereotypes. This is the sixth ARROWSA Kalahari trip over the past 11 years.

Due to logistical reasons and funding challenges the teenagers flew to Cape Town from Durban with Mr Dlamini and Ms Lange drove them up to the Kalahari.  This gave them the opportunity to not only go to the Kalahari but also to see and visit Cape Town's natural and cultural heritage sites such as the beaches, Table Mountain, District Six Museum and the Company Gardens.  The group was also interested in seeing the townships in Cape Town, specifically one of the largest in South Africa - Khayelitsha.

"It also taught me things about our country and its history and cultures.  I personally would've loved to spend another week there.  This trip helped broaden my knowledge about nature  and its beautiful features. We live in a beautiful country and I am glad that AROWSA provided us with these opportunities."  Angela

The route to the Kalahari via Worcester in the Boland led to the group driving through one of the most beautiful areas of South Africa and they were fortunate to be in time to see masses of Namaqualand flowers and Cape flora.  They appreciated the contrast to the lush Cape of the Karoo and Kalahari.

The long trip from Cape Town to the Kalahari proper was broken by sleeping over in Upington enroute.  There the group was spoilt by the River City Inn owners and management and on the way back they got to visit the Fishers' home and share supper with them at the hotel. For some of the group this was a highlight as  to have their own hotel bed was wonderful! 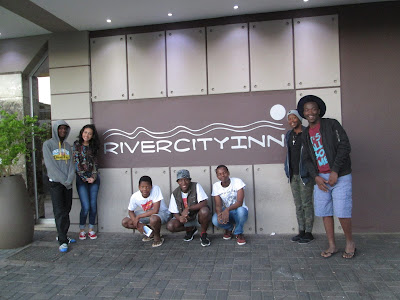 "What a phenomenal experience I had in the upper life #Cape Town, Kalahari & Upington etc...I can actually write a book about the trip." Sanele

The journey into the desert was broken by stopping and meeting the South Roots team and Belinda Kruiper and Oom Oeliset Jan Org. Oom Oeliset shared words of wisdom with the group before he and Belinda returned to Botswana. 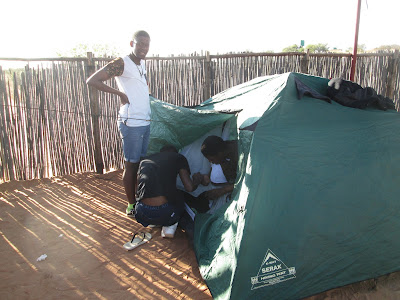 After a sweltering first day camping in the Kalahari proper at Kalahari Trails the desert became unusually cool for October.  A wonderful evening of interculural sharing was held with the visiting South Roots group on the first day around the fire.  After each group danced and leaders explained the context of their performance each individual from both ARROWSA Bechet and South Roots explained how they became involved in their particular group and what it meant to them.  The ARROWSA Bechet group did us proud with their dance and the confidence in which they spoke in front of strangers.  The leaders were impressed and surprised by the depth of their reflections on why they joined their groups and what they gained from them.

"I'd say my highlight was when we met the South Roots group and had a cultural exchange, and got to know each other.  And also meeting the Khoisan People, and seeing their craft work." Mabutho

On the second day in the Kalahari the ARROWSA group went into the Kgalagadi Transfrontier Park and standing on the Botswana side of the camp was a highlight for many of them.  A visit to some of the //Khomani crafters then followed.  Firstly Oom Dawid Gooi and his wife Bettie were visited at their stall on the side of the road and the group saw the traditional attire of the //Khomani and viewed and some ordered their crafts based on traditional practises.  Oom Patat was next to be visited and he kindly invited the group to view how he burnt images on bone using a heated piece of sharp iron. Some of the group also purchased crafts from Patat. 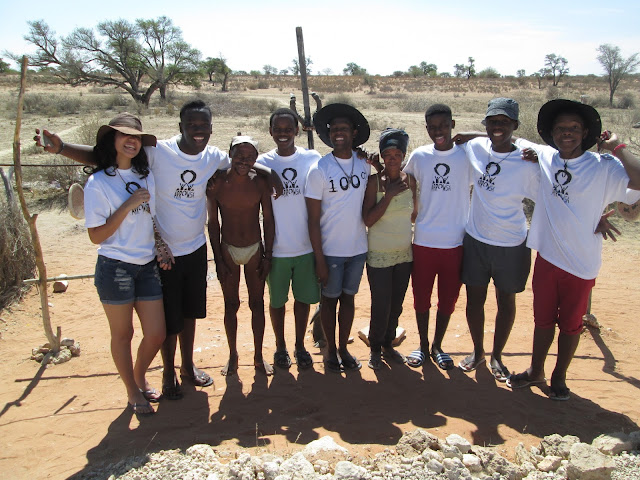 The teenagers were excellent in assisting with the preparation of lunches and the cooking of food on the fire each night in the Kalahari and many enjoyed eating food that was different to what they were used to eating at home.

Despite the mosquitos, the six males being squashed in a tent and the threat of scorpions in the sand at night the group made the most of the experience.  Early on the third morning the group were up and ready for a nature walk at Kalahari Trails.  The colony of rehabilitated meerkats accompanied the group and the presence of a number of baby meerkats not only led to much interest as they were fed by babysitter meerkats but also literally kept us on our toes ensuring that we were not nipped by their very protective mother Tigger. The nature walk was one of the highlights for some of the group as they learnt not only about the meerkats but about much of the fauna, flora and the geology of the Kalahari desert from Jaco. 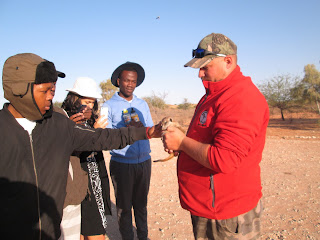 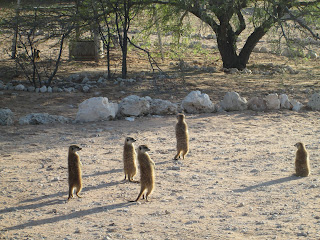 Later that morning we once more visited Oom Dawid Gooi and Bettie and Oom Patat to pick up crafts that had been ordered.  Two of the young male teenagers were thrilled with the bone and beaded necklaces that they had ordered from Oom Dawid and how he had burnt their names on the bone - with a hashtag # infront of them!  We also were fortunate to catch Oom Isak Kruiper at his home just as he was on his way to lead a veld school.  He gave time to chat to Mary while the teenagers played with the pre-schoolers in his yard. 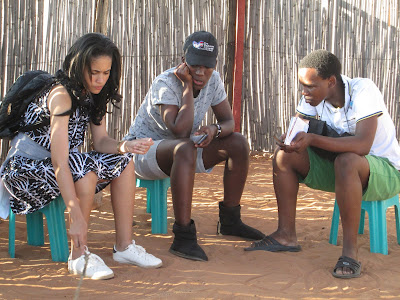 That evening at the fire the reflection time that was part of every day's closure was especially meaningful as the group asked deep questions about the origins of the San and their own cultures in South Africa as well as religious beliefs and scientific theories of origins.  After this a fun photo shoot time was had on the nearby dune as the sunset. 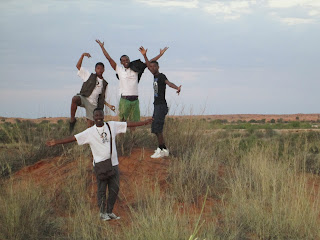 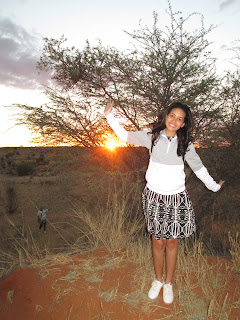 The next morning was back on the long road to Upington.  A highlight for the group was a tour of the Protea Upington and Oasis hotels.  As some of the group were tourism and hospitaliy students the opportunity seemed appropriate.  Cooldrinks drunk at the splash pool in the Protea Upington courtyard gave the group a taste of the 'high life' and some expressed that it inspired them to strive to be successful one day.  A visit

to the Fisher's home as previously mentioned followed and then a meal on the River City Inn stoep where the teenagers chatted to Devene and learnt a bit about Upington life. Carolin and Michael Fisher were impressed with the ARROWSA Bechet's performance that they did for them on the stoep and especially with the quality of choreography.

Enroute back to Cape Town the next evening the group once more slept at South Roots leader Shanette Martin's home and were thrilled at the supper she prepared for them.  Recipes for how to make 'English' mashed potatoes were shared.

After a visit to Gordon's Bay and a walk on the beach the group stopped at Mary Lange's flat in the Strand for a short while before making their way to the District Six Museum. Ex-resident Oom Noor was their guide and had them enraptured with his stories. They also met Ms Merel Godrie of the Netherlands at the museum.  A walk through the city past the parliament buildings led the group to the Company Gardens where they were intrigued by the begging squirrels.  The VOC vegetable and herb garden was visited before the group returned to the airport for their flight back to Durban.

"The Kalahari trip was a blissful experience.  Quite a few highlights for me included meeting the Khoisan people, seeing Robben Island, seeing Table Mountain and visiting District Six Museum. What I came back with was a sense of self, a discernment and unified leadership." Lungelo

"I've really grown as a person to appreciate and have gratitude for the many opportunities and privileges that I have available." Thabiso"

"This trip has had a positive impact on me, it has helped me to grow as a person and has made me realise that I am my own leader and I should not depend on anyone to lead me." Mabutho

"At the first ARROWSA Bechet group meeting on their return the 6 learners that went to the Kalahari each shared feedback/reflection about the trip. It was wonderful as they gave very positive feedback and they encouraged the rest of the group." Bheki