The Organisation’s major achievements over the past year:


A. Promote the arts for peace with an emphasis on interdependence on local (Durban) level to youth via the ARROWSA Bechet High School project.  This was achieved through twice a week sessions in 2012 and early 2013.  An average of 18 learners from Grade 8 to 12 from disadvantaged backgrounds attended the sessions but numbers dropped in this year.  The sessions included the use of drama, music, dance and visual arts. The school participation was coordinated by Joy Seidle and sessions were facilitated by Mary Lange and Bhekithemba Dlamini assisted by Luthando Ngema and Prestage Murima in 2012 and early 2013. A workshop in finger puppet making was facilitated by Sana Ebrahim, 18 October 2012. ARROWSA Bechet’s ongoing participation in quarterly Youth Forum workshops was facilitated by Joy Seidle (Schools portfolio). Collaboration between ARROWSA Bechet and Bechet Interact youth was facilitated by Bhekithemba Dlamini and further cemented through Mary Lange as guest speaker at the Interact awards ceremony 2012.  A collaborative project was held with Durban University of Technology’s art gallery, “South – North Conversations” on 20 July 2012, managed by Francesca Verga (DUT art gallery), and the Jewellery Design and Manufacture students facilitated by Marlene de Beer.  The opening of the exhibition was organised in collaboration with the Centre for Communication, Media & Society, University of KwaZulu-Natal and the Bechet High students performed. Sales of the exhibition went towards an ARROWSA Bechet representation at the upcoming 2013 Indra Global Youth Congress in Derry/Londonderry, Northern Ireland.  The ARROWSA-Bechet Ubuntu S’dumo Bike continued to be displayed in 2012 at the Green Heart City/Ecology & Cycling stand at the Imagine Durban Sustainable Living Exhibition, 30 August - 1 September 2012, Durban Exhibition Centre.  ARROWSA Bechet participant Gilly Mchunu received the Butterfly Beret Accolade for her contribution to heritage. Gilly received her accolade, at an event hosted by Green Heart City in conjunction with eThekwini Municipality, the South African National Society (SANS) and Alliance Française de Durban. 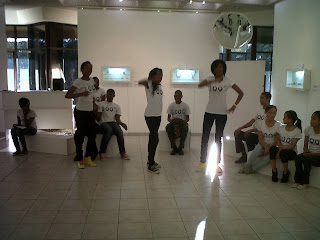 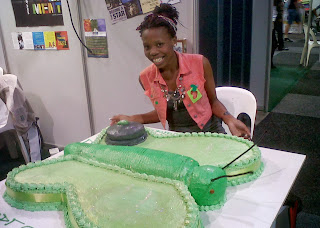 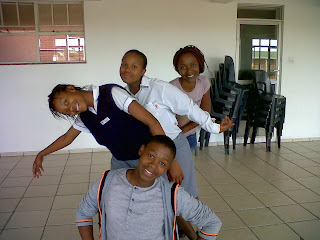 B. Promote culture and heritage for knowledge and the promotion of peace through understanding on local level to youth via the ARROWSA Bergtheil Museum and Palmiet Nature Reserve educational programmes.  This was achieved through the continued presentation of the programme San past and present at the Bergtheil Museum to Grade 4 and 5 learners. Through concerted efforts by the Palmiet Nature Reserve (PNR) Management Committee the educational programmes to the Gwalagwala cliff archaeological site were focused upon and revived with a view to continuance of the collaboration between programmes there and the Bergtheil Museum but specifically to providing a pilot project for schools from Township and inner city disadvantaged areas that had not yet attended the Palmiet programme. This was achieved through a successful funding application to the Trans-Vaal branch of the South African Archaeological Society.  The funding received was towards the marketing, presentation and research of the programme to specifically schools previously mentioned.  It was however once more emphasised that there was still a need for a bridge to be erected over the river. A media article appeared in a local newspaper, The Highway Mail, in this regard in February 2013.  The programmes and workshops were facilitated by Mary Lange, Aslina Madikizela,  Alvine Calboutin, Warren Friedman, Nandi Hlatshwayo  and Luthando Ngema in 2012-2013. Management support was provided by Nomusa Mabaso. 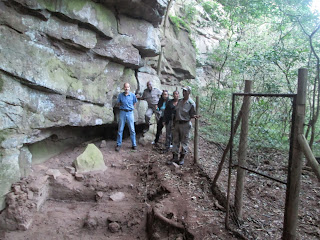 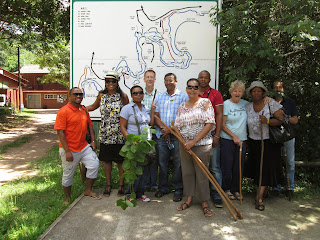 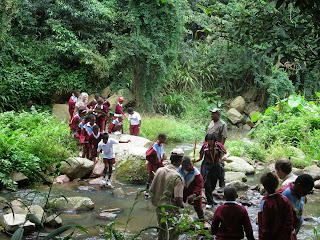 C. Promote arts, culture and heritage for peace and reconciliation on a national (South Africa) level through intercultural exchange.  This was achieved through a successful bid to the National Heritage Council through CCMS, UKZN for funding to publish a coffee table book on the rock art recorded and the project methodology that took place in 2010 and 2011. ARROWSA coordinated the project and liaised successfully with Kalahari community members who contributed to the book. The Bergtheil San programme continued to contribute a percentage of profits to a Kalahari community.  Once more Msunduzi Museum requested that ARROWSA facilitate a storytelling outreach workshop in Pietermaritzburg in 2012.  This was successfully presented to underprivileged children by Luthando Ngema, Aslina Madikizela and Mary Lange at the South African Vroue Federasie (SAVF) community hall at Oribi Village. Various media articles disseminated ARROWSA objectives. These were written by Sana Ebrahim on ARROWSA project and events in The Daily News, The Independent on Saturday, Berea Mail, The Weekly Gazette, The Rising Sun and SUBtext No: 21, Winter 2012.


D. Promote arts, culture and heritage for peace on a regional (Southern Africa) level.  The links with a Zimbabwean school continue.  These were facilitated by Prestage Murima, a masters student of CCMS, UKZN. Links were mainly facilitated through the ARROWSA facebook page. This is an area that needs attention in the new year.


E.  Promote local, national, regional and global intercultural communication through use of the internet.  This was achieved globally through the successful implementation and completion of the intercultural project with Chile (initiated through ARROW international/now Indra Congress contacts) whereby the learners’ cultural information was exchanged via emails,  culminating in a Skype session between the learners.


The above objective was also achieved through the continued use of ARROWSA facebook administered by Mary Lange, Bhekithemba Dlamini and Sana Ebrahim. Facebook pages by collaborators such as South Roots in South Africa, INDRA Congress in the UK and ARROWZim (as previously mentioned) assisted in achieving this objective. Participation in the 2013 Derry Global Congress continued to be liaised both with the Indra Director, David Oddie and the Derry, Northern Ireland, coordinator, Mary Duddy.


ARROWSA also created their own blog http://arrowsa.blogspot.com/ with regular posts that communicated the activities, reports and plans of the organisation.  The blog was effectively used to link posts to ARROWSA facebook and relevant partners such as CCMS, UKZN facebook. 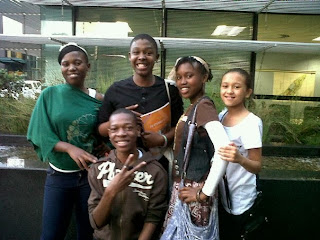 F.  Promote a national, regional and global network with common goals of arts, culture and heritage for peace.  This was achieved through the activities mentioned in A to E as they included not only individual artists and the organisers and participants in the activities mentioned above but also educators from Bechet High School, lecturers and students from the Centre for Communication, Media and Society (CCMS), University of KwaZulu-Natal and the Jewellery Department, Durban University of Technology, staff of the Bergtheil and Msunduzi Museum, staff and members of the Palmiet Nature Reserve Management Committee and members of INDRA Congress, Plymouth and Northern Ireland. 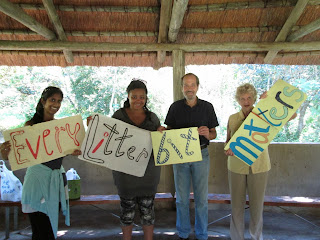 G.  Promote the collaboration of tertiary, secondary and primary educational institutions in action research on ARROWSA collaborative research projects.   This was achieved through various means under the ARROWSA research portfolio headed by Dr Dyll-Myklebust: 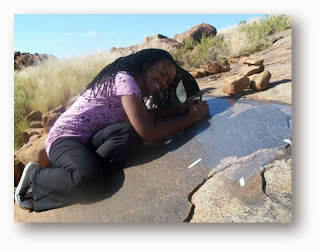 
2012-2013 highlighted a need for greater feedback of research project results to the participants especially at ARROWSA Bechet. A further lack in the research area that was highlighted was a formal agreement as to the acknowledgment of the various research players where relevant.


I.  Promote sustainability of the project through obtaining funding for the various projects.


The registration of the organisation, two years of financial statements and registration for tax exemption made it easier to apply for funding in 2012-2013.  Funding applications were written by Mary Lange and Eliza Govender in consultation with Bhekithemba Dlamini.


Funding was awarded from National Heritage Council (NHC) for: Biesje Poort, Northern Cape, Rock Art Book: A Learning Process. This is a collaborative interdisciplinary and intercultural project based within CCMS, UKZN.


Objectives of the project are:
- To disseminate knowledge of the Biesje Poort rock art and surrounding areas.
-To provide opportunities for initial Biesje Poort team members (who promote multi-racial/cultural/academic disciplinary representativity) to gain skills in research, report writing and editing.


On 26 November 2012: Mary Lange and Lauren Dyll-Myklebust attended a NHC Advocacy Workshop regarding the aforementioned funded project.
The following funding applications were made in the year 2012-2013:


-A successful application in November 2012 was made to the Trans-Vaal branch of the South African Archaeological Society.  R20 000 was received that covered marketing, facilitation and research costs for the Palmiet Archaeological Educational programmes.


-An application to Ethekwini’s Grant-in-aids for the ‘Cooling Conflict: I am worthy’ that included workshops run by David Oddie was unsuccessful – reasons were not provided by eThekwini.


-An application to National Arts Council that included the scripting of an improvised play, Imbewu Yesizwe – The Nation’s seed by Tshetiya Tshimanga, Bhekithemba Dlamini and Luthando Ngema.  The funding application was for air tickets and London cultural excursion for 7 people attending the Indra Global Youth Congress 2013 – results in June 2013.


The collaborative DUT, ARROWSA, CCMS jewellery exhibition and the Palmiet raised funds towards the forthcoming 2013 global youth Derry congress. Further donations to this event were given by ARROWSA management and the general public through a donation request initiative  facilitated by Eliza Govender (ARROWSA Funding portfolio). Bergtheil and Palmiet educational programme costs were covered by school payment for the programmes. The general running and administration costs of ARROWSA were partly addressed through a continued ten percent admin cost on any compensation for programmes or workshops. Admin costs such as telephone, email, local transport costs etc. was covered by individual volunteers and collaborating organisations and institutions. 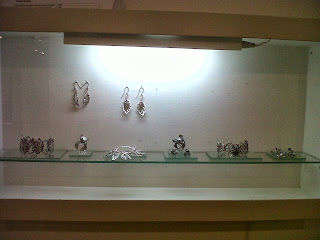 Challenges experienced regarding funding were as follows:


-An application was not made to the Lottery due to not meeting some of the requirements at this point in time e.g. a tax clearance certificate.


- Former corporate ARROWSA funders TBP Civils closed down and the firm Osmond Lange Architects was not able to provide financial funding for ARROWSA in 2012-2013 but they continued to sponsor photostats, prints and other administration support e.g. courier costs and skype facilities for the Chile project.


-A need was highlighted to obtain tax clearance certificates in the following financial year and possibly external auditing. Fund raising was still an objective that needed to be addressed to ensure sustainability of the organisation if present management was no longer available to carry general day to day running costs.


2.4 Give a general description of the ways in which beneficiaries (individuals/groups/ communities/social or economic or environmental condition) benefited from your Organisation’s programme, projects or services during the past year.


Durban youth benefitted through the acquisition of arts skills and knowledge of culture and heritage towards understanding of themselves and other cultures and thereby breaking down negative stereotypes. ARROWSA Bechet, through functions such as the CCMS, UKZN and DUT jewellery exhibition were able to meet and present to different age groups, economic profiles and cultures face-to-face whereby not only was their knowledge and understanding increased but skills and confidence was fostered specifically in performance, public speaking and ambassadorship. DUT jewellery students benefitted through the creation, promotion and sale of their jewellery.  Local artists benefitted from a platform to perform to the general public. Unemployed youth benefitted from opportunities for skill transference and training through participation as facilitators of the Bergtheil and Palmiet Nature Reserve programmes. The Bergtheil Museum and Palmiet Nature Reserve benefited through increased numbers of attendance. School learners and teachers who attended the Bergtheil and Palmiet Nature Reserve programmes benefited through experiential hands-on-knowledge and extension of their school curriculum. CCMS, UKZN benefited through research field work for their students.  Organisations and institutions, both government and non-government, who were affiliated or associated with ARROWSA in the year 2012-2013 benefited through positive exposure. 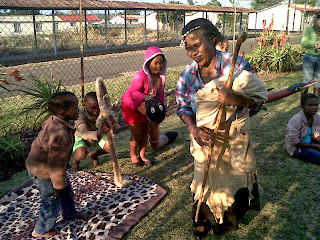 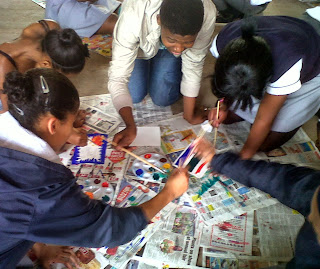 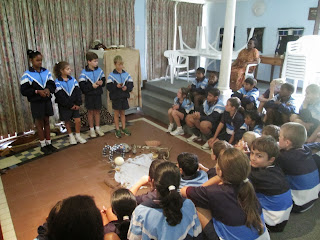 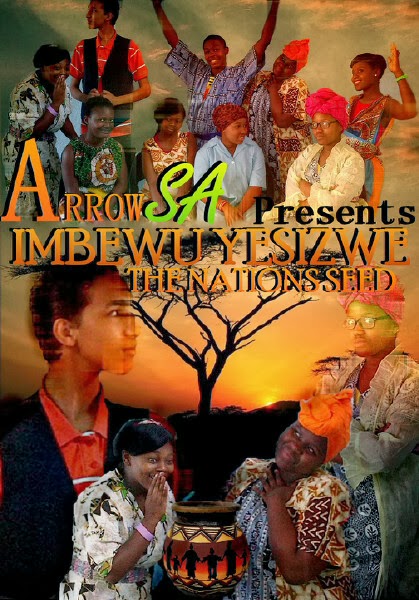