The National Arts Council funding of air tickets for the ARROWSA Indaba Congress Plymouth 2015 facilitated the training and sharing of knowledge and skills specifically regarding Applied/Community Theatre for ARROWSA facilitators, co-ordinators, facilitators and participants as well as UKZN drama staff and students who physically went to the United Kingdom and those who remained in Durban.

As one of the ARROWSA youth to originally have gone with to Plymouth was unable to go to the UK due firstly to the delay in visas and secondly because the September trip clashed with her trial exams the Indra Plymouth facilitator Alix Harris was brought to work with the ARROWSA Bechet youth and University of KwaZulu-Natal Drama and Performance students (See Appendix 4). In this way the funding would also ensure that the pay-it–forward aspect of the project extended to a greater number of learners and students and facilitators within South Africa.
Alix Harris is not only an experienced facilitator and practitioner with Indra but also has her own organisation (see http://www.plymouthherald.co.uk/Face/story-27536583-detail/story.html).  As previously mentioned she had played a central role in the July and September logistical co-ordination and performance workshop facilitation of the ARROWSA Indaba Congress.  She stayed with Mary Lange and Miranda Young-Jahangeer in Durban and Alix’s accommodation, food and transport was in this way covered.

I visited the Bechet High School on four of the days that I was staying in Durban. I delivered a workshop on physical theatre introducing the group to some of the games that we play in England and some exercises to generate some physical material. The theme that we are looking at in England is around the idea of environment. 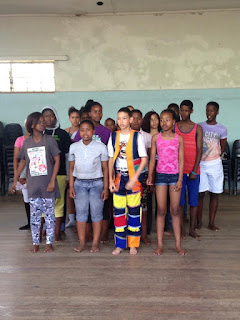 The ARROWSA Bechet group identified two different aspects of environment;
Natural: One group explored the notion of planting of seeds and growth, and how we have no control over nature, but highlighting just how important nature is to us as human beings. They talked about global warming and the impact of destroying the natural things around us.
Social: Two groups played around with ideas around social environment. One group looked at the effects of drugs and alcohol, highlighting that it is has a detrimental impact on people’s lives. Lastly the other group looked at the idea of being imprisoned and sentencing, people doing extreme crimes and being sentenced for a short amount of time, they juxtaposed this with the sense of being trapped and imprisoned for unfair reasons, which led to the freedom of Nelson Mandela and positive protest.
The group responded positively to the exploration around this subject matter and also to using physical theatre. On one of the days I spent a couple of hours playing games with the young people, it was incredibly refreshing for me and reminded me just how important the idea of playing games is. The young people expressed so much joy and willingness to learn new games. They were so grateful for the new skills that I was sharing with them and it was an absolute pleasure to be able to work with them. They biggest thing I have taken back with me from working with the group is their energy when they perform and how significant dance and singing is to them and how at ease they feel with dancing and singing. 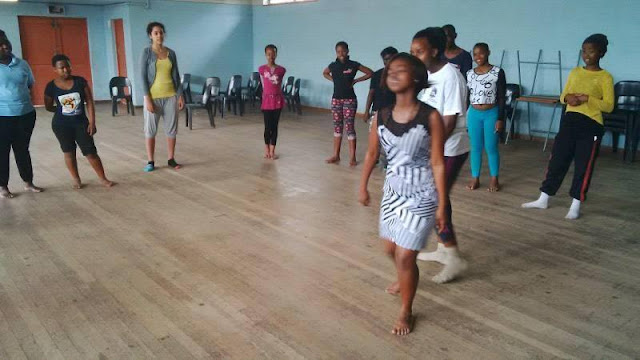 I visited a performance exhibition of a project by the Applied Theatre and Architectural students, UKZN. I found the whole concept of the project really interesting from working across disciplines to help inform one another’s practice to the actual concept of the 5-7,000 people that walk the same route every day from Cato-Manor to the city centre in Durban. It was great to see some of the work that the theatre students do and the quality of their performances.

I was able to work with some of the postgraduate students and explore again the use of games when working with communities. It was useful to see the traditional games that are played. I do wish that I could have had more time so that I was able to have a greater understanding of the games so that I could bring them back to the UK. One of the challenging things I found about the education system was the fact that the arts are a subject are not available at all schools and therefor you have to wait to study them at university or that you must do them as an extra-curricular activity. It emphasised to me just how important an organisation such as ARROWSA is to the young people in the Durban as it provides them with that space to be creative and explore through the arts. 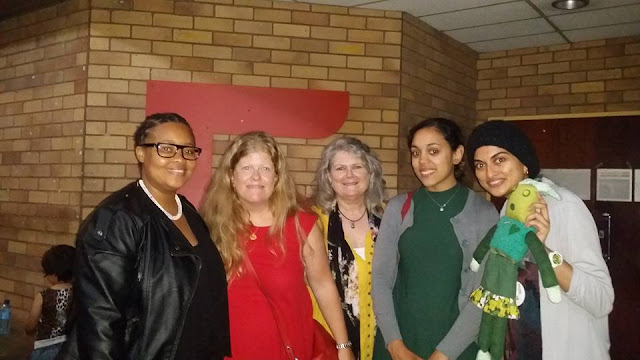 
"Shifting perceptions of spatial practice through alternative methodologies" with the School of Built Environment and Development Studies, Architecture in conjunction with the School of Arts, Drama and Performance Studies on the 6th October 2015. She was accompanied by ARROWSA management & UKZN staff and students Luthando Ngema, Miranda Young-Jahangeer, Mary Lange, and Sana Ebrahim.

2.3.3 The Palmiet Nature Reserve.
I had the privilege of being able to look at the museum and to be taken into the Palmiet Nature Reserve by Mary as ARROWSA has cultural and natural heritage programmes linked to this site. This was very useful in terms of our theme of environment back here in the United Kingdom. It reminded me being in the nature reserve as well as seeing the “Masihambisane” performance exhibition at the University how important it is to go out into the environments that people inhabit.

2.3.4 Other observations and pay-it-forward
For me as a mixed race person my visit to South Africa had a greater impact on me personally than I had anticipated. The sense of separated communities was really apparent and being placed into the ‘Coloured’ community was a new experience for me. I am really intrigued as to how my show “Mixed up Me” would be received in South Africa, as a lot of the issues and history is similar but also very different at the same time.
In regards to the ARROWSA Bechet group, I think that it would be beneficial for them to be connected with a theatre so that there can be more skill exchanges, Mary and I have discussed this as being a possibility as a link up with us in Plymouth.
From the photographs I took in Durban are now feeding into the Plymouth Indra groups creative process, and they will be creating a section in their performance based around the environment in South Africa that I experienced and the information they are getting from communicating over Facebook with the ARROWSA groups.
It has been an unforgettable experience and I cannot wait to return for longer.
1.     Conclusion and Finances (written by Mary Lange)

The National Arts Council funding of air tickets for the ARROWSA Indaba Congress Plymouth 2015 facilitated the training and sharing of knowledge and skills specifically regarding Applied/Community Theatre for ARROWSA facilitators, co-ordinators, facilitators and participants as well as UKZN drama staff and students who physically went to the United Kingdom and those who remained in Durban.

The greatly increased rand pound exchange rate threatened to impact the project negatively but through community fund raising, Indra Plymouth provision of accommodation and food and support from ARROWSA participants’ personal funding the objectives of the project were met and the desired outcomes achieved. This project’s indaba focus will further serve as an excellent steppingstone for increased effective international partnerships based on a common focus on the promotion of peace and conflict solutions through the use of Applied/Community Theatre.  This will be pursued in preparations for a global Indra Congress hosted by ARROWSA and UKZ Drama and Performance Department in July 2018